David Natidze (16/03/1969) was born and raised in Tbilisi, Georgia. He studied sculpture at the Academy of Fine Arts (1989-1994) and after graduating he moved to Belgium where he continued with sculpture at the Royal Academy of Fine Arts, Antwerp. His first project was in 1996, working with sculptor Dirk Lenaerts on the renovation of the statues at Leuven Station. Since then, projects he has worked on include the restoration of the Cathedral of Saint Michael & St Gudula (Brussels), the Cathedral of Our Lady (Antwerp), the medieval fortress of Het Steen (Antwerp), the statues of Grand-Place (Brussels) and the Cathedral of Saint Rumbold (Mechelen). He has participated in the Sculpture Symposium, creating monumental sculptures in Balegem (Belgium, 2003) and Santiago de Compostela (Spain, 2005). In 2007 he was invited to participate in a monumental sculpture project in Batumi (Georgia). Since 2008 he has taught at the Atelier Schildershof in Schilde (Belgium). Throughout these years he is regularly to be found at exhibitions and art shows across different countries and galleries where he exhibits collections of his sculptures. Natidze's work can be described as an investigation into different shapes and objects with their underlying thoughts. The various subjects he depicts are representations of simplified objects and forms taken from the personal environment that inspires him. By abstracting these, he questions the attitude of form, feelings and unwritten rules. 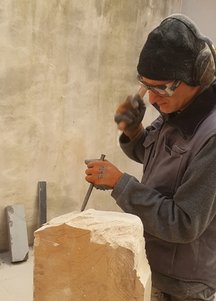